In 2017 the Clark County Prosecutor’s office prosecuted 874 felony cases in Common Pleas Court. As part of these prosecutions, our office forfeited $89,565.96 from criminals. In addition, our Diversion Program accepted 34 felony cases, of which 20 cases were completed by the end of the year. The Diversion Program successfully recovered $39,999.36 in restitution for victims of crime, and also cleaned graffiti at 491 sites around the county. In Juvenile Court, we prosecuted 867 new delinquency cases, as well as 83 adult contributing to the delinquency of a minor cases, and 499 traffic cases. In addition, we prosecuted 262 dependency temporary custody cases, and 18 permanent custody case. The Clark County Prosecutor’s office also assisted in the collection of approximately $3,870,000.00 in delinquent real estate taxes, as well as the representation of 31 County agencies, 10 Townships, and the County schools.

During the months of May, June, July, and August, the Clark County Prosecutor’s office hosted a "Summer Speaker Series". The series was free to all members of law enforcement in Clark County, and highlighted areas of interest to the law enforcement community. Topics included wound identification, heroin and opioids, search and seizure, and courtroom testimony. The Prosecutor’s office was able to partner with several local businesses to provide not only the presentations, but also a free lunch to all the attendees. Representatives of 7 different law enforcement agencies attended the lectures. 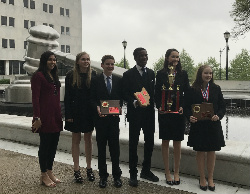 Assistant Clark County Prosecutor Megan Farley once again helped to coach the Springfield High School Mock Trial Program. As a coach, she helped to teach students about the law, and how to prepare and present cases at trial. The students compete in Ohio against teams from around the state, advancing to the state competition. She also coached the Springfield Moot Court team that came in second place in the state of Ohio, and coached a team of students who competed at an international Mock Trial Program in Atlanta. Assistant Clark County Prosecutor Bill Merrell also assisted in coaching one of the Springfield High School Teams. 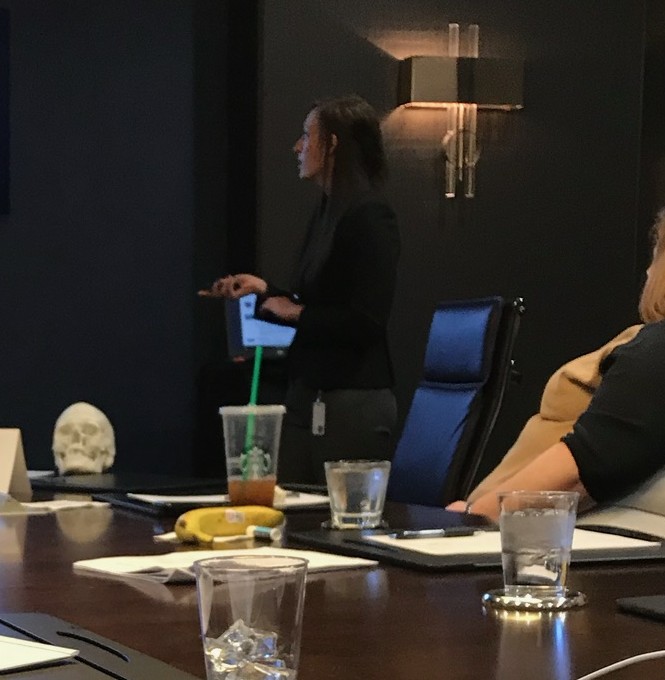 In December of 2017, the Clark County Prosecutor’s office criminal division held a training and retreat session in Louisville, Kentucky. During this program the criminal division was able to obtain Continuing Legal Education hours, which are mandatory in retaining their licensure. Topics included facial reconstruction of skeletal remains, criminal activity and the dark web, advancements in DNA testing, drug and alcohol awareness, prosecutor driven felony traffic prosecution and a case study on different forensic techniques. The attorneys also participated in team building activities aimed at reducing stress and building team chemistry. 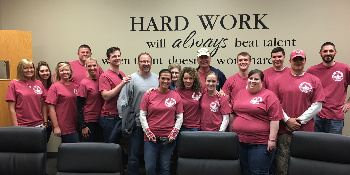 On April 21, 2017, the Clark County Prosecutor’s office participated in the Great American Cleanup. The office cleaned approximately four miles of the bike trail between Sherman Avenue and North Belmont Avenue, and between Lagonda Avenue and McCreight Avenue. By the end of the day, the office had picked up more than forty trash bags of garbage from their assigned area. 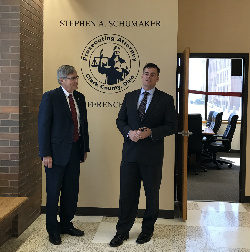 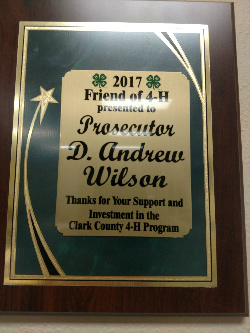 The Clark County Prosecutor’s office was awarded the 2017 "Friend of 4-H" award. This award is given annually to an organization that has shown extraordinary support for the local 4-H Chapter. In June of 2017, members of the Clark County Prosecutor’s office conducted a training for all of the 4-H summer camp counselors, and counselors in training which covered liability, negligence, and other potential issues related to the summer camp. The training culminated in a "mock trial" where the camp counselors played the role of various witnesses, and defendants. 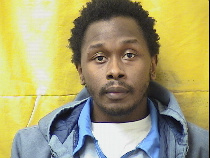 On November 1, 2017, a jury trial commenced for Steve P.B. Wilson, Jr. for felonious assault with a repeat violent offender specification, abduction, and domestic violence. After several days, he was convicted on all counts. During the last week of January, 2017, Steve P.B. Wilson, Jr. beat his pregnant girlfriend so badly that she was covered with bruises from her head all the way down her arms and legs. She had puncture wounds to her shins, a broken nose, and a broken toe. She also suffered burns on her back, and her arm from where the defendant poured hot grease on her. The defendant did not allow her to leave the house until February 8, 2017 when she went into active labor and delivered their child on the same day. The defendant threatened her, and told her that if she told what happened to her he would hurt her and her family. It was not until the defendant was evicted from the hospital that the victim disclosed to nurses, doctors, and officers what had happened to her. On December 5, 2017, Steve P.B. Wilson, Jr. was sentenced to 20 years for the brutal beating of the victim. He was found to be a repeat violent offender due to his conviction for felonious assault against another mother to his children out of Montgomery County, where he was still on probation when he committed this crime 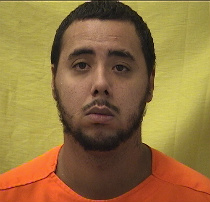 Kenny Pendleton was sentenced to 21 years in the Ohio State Penitentiary for trafficking in, and possessing heroin, fentanyl, and cocaine after being found guilty by a jury. He was also convicted of having a weapon while under disability. He was currently on parole at the time that the Springfield Police Division executed a search warrant. $3,062.00 in U.S. currency was seized from the defendant’s person. He was found to be a major drug offender for possessing over 100 grams of heroin, fentanyl, and cocaine. 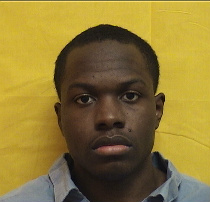 On October 6, 2017, after a four day jury trial, Dennis Kennedy was convicted of two counts of discharging a firearm into a habitation with firearm specifications, and improper handling of a firearm in a motor vehicle. The defendant was sentenced to the maximum sentence of twenty-three years in prison. Dennis Kennedy was one of Springfield’s most violent criminals, and is thought to be involved in other shootings throughout the City, including homicides.

On September 22, 2015 the house that the defendant was dealing drugs out of was shot into by a rival gang at around 9:00 p.m. At the time of this shooting, Dennis Kennedy was with co-defendant Aaron Roberts. The third co-defendant, Krista Jones, picked up the pair and took them to where they kept their semi-automatic rifles. After getting their AK-47’s the pair was driven by Jones to the area of Pine Street where they shot close to forty rounds at, or into a house that had children inside. After the initial shooting, Jones then transported the pair to a second location, that being on S. Center Boulevard where they again shot close to forty rounds at, or into a house that was occupied at the time. Springfield Police were able to locate them a short time after the second round of shots, and a police chase ensued. The chase started on the South side of Springfield, and continued for 15 miles, all the way to South Charleston, Ohio, where the South Charleston Police were able to stop-stick the vehicle, bringing it to a stop.

Dennis Kennedy fled from the scene, and was not located for several months. However, through the investigation it was determined through cell phone records, and other witness testimony that Kennedy was the third individual in the car. In addition to Kennedy’s twenty-three years in prison, Krista Jones was also found guilty at a jury trial, and was sentenced to seventeen years, and Aaron Roberts pled to the charges, and received eight years in prison. 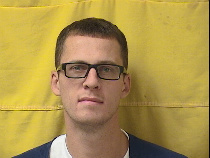 Defendant, Casey Stoermer, was convicted by a jury of possession, and trafficking in cocaine, and weapons under disability. While executing an arrest warrant on another individual, officers located Defendant in an upstairs bedroom with an operable Tec 9, 9 mm pistol, $2,863, and 6.02 grams of Cocaine. Mr. Stoermer was not allow to posses a firearm due to previous convictions, and there were children in the residence at the time of the arrest. A search warrant was obtained, and 270.27 grams of cocaine was found in Defendant’s vehicle, along with $405.10, and Defendant’s identification card. There was also a loaded, operable Intratech 9 mm Luger in Defendant’s bedroom, and an operable 32 Auto Beretta with a magazine and live ammunition on top of the refrigerator. He was sentenced to 18 years in prison, and found to be a major drug offender. 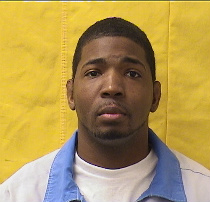 On August 11, 2017, Georgia native Tevius Turner was found guilty of murder by a jury. During the 4 day trial, evidence was presented that in late November of 2016, the defendant was a general manager of the Quality Inn on Leffels Lane in Springfield, Ohio. Turner had a disagreement over a personal loan with one of his employees, and sought to reclaim a paycheck that the employee had taken to a local check cashing center. During this interaction the defendant produced a gun and placed it in the window of the car that the employee was a passenger in. As the employee’s female cousin pulled away, Tevius Turner fired one shot, striking the female driver in the head, causing her death. After originally denying pulling the trigger, the defendant changed his strategy when he took the witness stand, claiming that the gun went off accidentally. The jury did not believe the story of the defendant, and convicted him of purposeful murder. 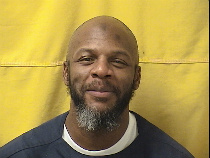 Akeyinde Holloway is a drug dealer who has been in and out of prison, and on parole. In 2017, he was convicted by a jury of multiple counts of aggravated possession, and aggravated trafficking in drugs. Officers observed a hand-to-hand transaction, and watched Defendant run into a house, and place a purple Crown Royal bag on the floor. The resident of the house allowed officers to enter, and upon entering, officers found that the Crown Royal bag contained methamphetamine, diazepam, oxycodone, and hydrocodone. He was sentenced to a total of 12 years, and 6 months in prison. 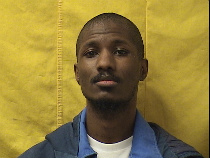 In April 2017, Akeem Davis was sentenced to life in prison with the possibility of parole after being convicted at a jury trial on charges of rape of a child under 13, and kidnapping stemming from an incident that occurred on March 12, 2011. On that date, a 12 year old girl reported that Davis held her in the bathroom against her will, and forcibly raped her while at her friend’s house. Davis was known to the girl, and she and her friend immediately ran to her parents to report the rape. Davis was arrested a month later, having fled the jurisdiction. In July 2011, the defendant was released from jail on bond due to DNA results not being completed yet. After his release, BCI was able to locate Davis’ DNA inside the girl’s underwear. Davis then absconded, and was not apprehended until November 2016, in the Chicago area.

Davis testified in his own defense, alleging that the girl had kept moving on his lap while he was clothed, against his will, in an attempt to try to explain the DNA evidence. Through the work of the Clark County Prosecutor’s Office, the Victim Witness Division, the U.S. Marshal’s Task Force, Springfield Police Division, and BCI, Assistant Prosecutor’s Brian Driscoll and Andrew Picek were able to present all of the evidence in the case, including all of the witnesses, despite the lengthy passage of time, and secure a conviction and lengthy sentence against Davis for his crimes. 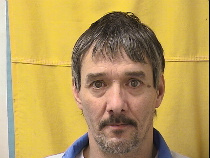 Between January and April 2016, Ronald Moore and Jeffery Jenkins broke into multiple homes in the Ridgewood neighborhood in Springfield, Ohio. The pair stole anything of value from credit cards to family heirlooms. They then would sell the stolen items on the streets, and to pawn shops. In April, Springfield Police pulled over the truck that Moore and Jenkins were driving, and detectives were able to link stolen items inside the truck to the burglaries. The defendants each stated that they were committing the crimes to get money to fuel their heroin addiction. In September 2017, Jeffery Jenkins was sentenced to 8 years in prison, and Ronald Moore was sentenced to 11 years in prison for their roles in the home burglaries, as well as other break-ins.